This is an excellent fresh pickle. They are crisp and not too salty or sour, just enough in my opinion, and as garlicky and dilly as you would like.  It will go with your cheese platters and sandwiches. Delicious chopped up in potato salad.

It makes an excellent sandwich itself, thinly sliced with tomato, mayo, and arugula, maybe some avocado.

They do not need special pickling jars, as I have used in the picture,  just clean glass containers that have lids. 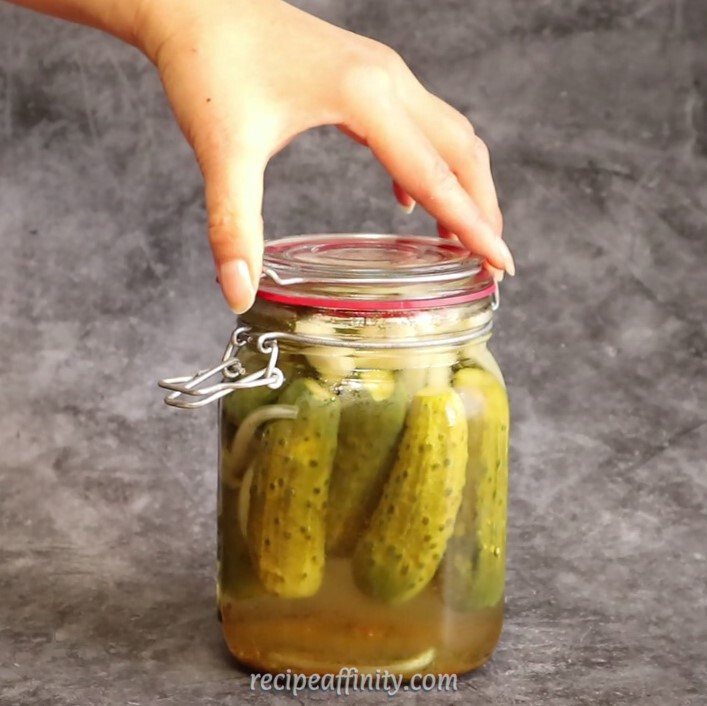 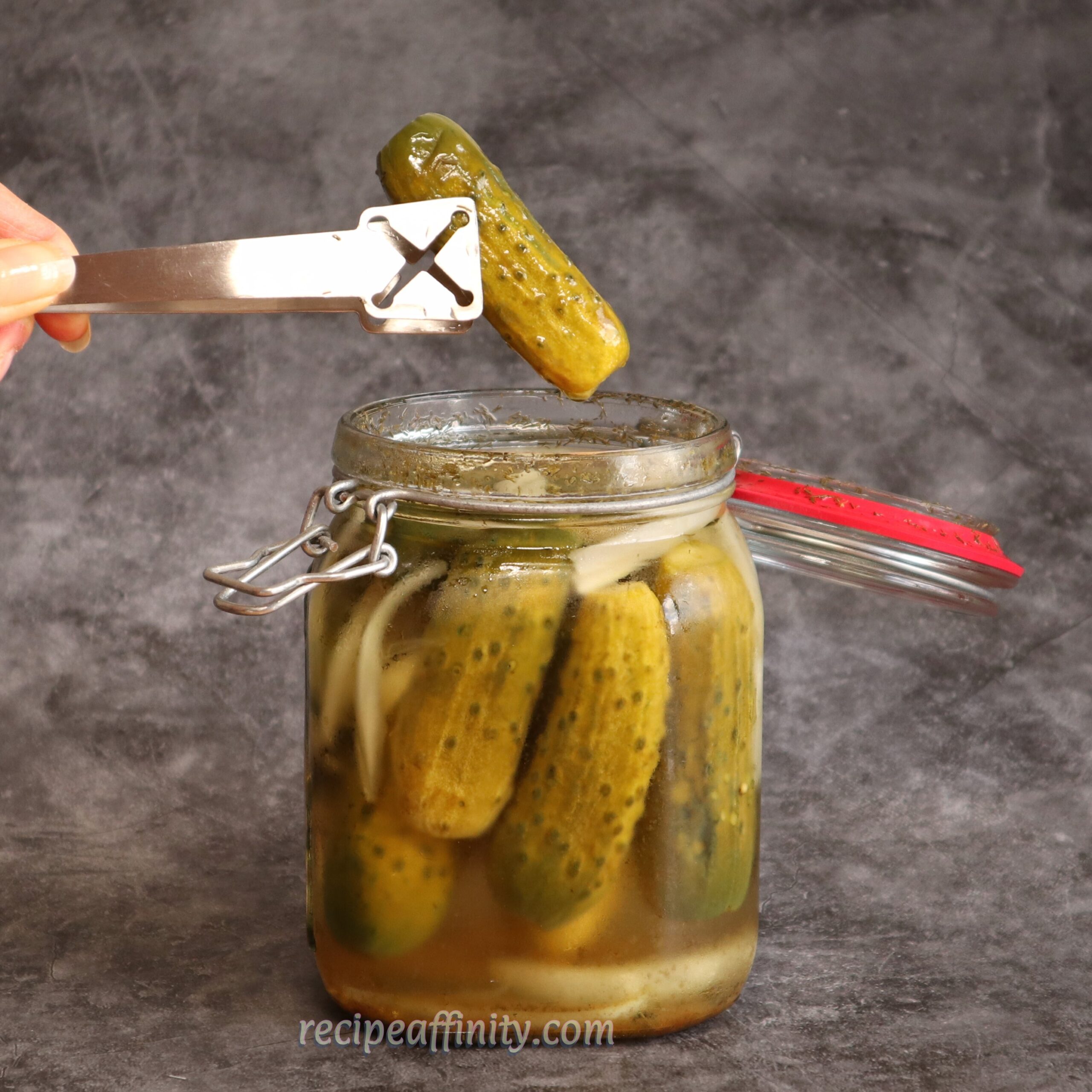 Wash your cucumbers well, using a brush or a towel, they tend to have dirt embedded in them.

Trim the end where the flower fell off.

This end contains an enzyme, called pectinase, that breaks down the cucumber enough to affect the texture of the cucumber as it pickles making them less crisp.

You don’t have to chop a hunk off the end, just enough to remove where it was attached, on the paler end of the pickle.

Pickling cucumbers are also known as Kirby cucumbers.  They are often planted in home gardens, tend to be on the smaller size, have little pokey nubbies and are crisp.  Excellent on their own with a sprinkle of salt.

I have never tried other cucumbers but I would imagine the smaller English cucumbers would be fine, and I have pickled raw cauliflower, carrots and celery, raw, or lightly boiled and cooled. 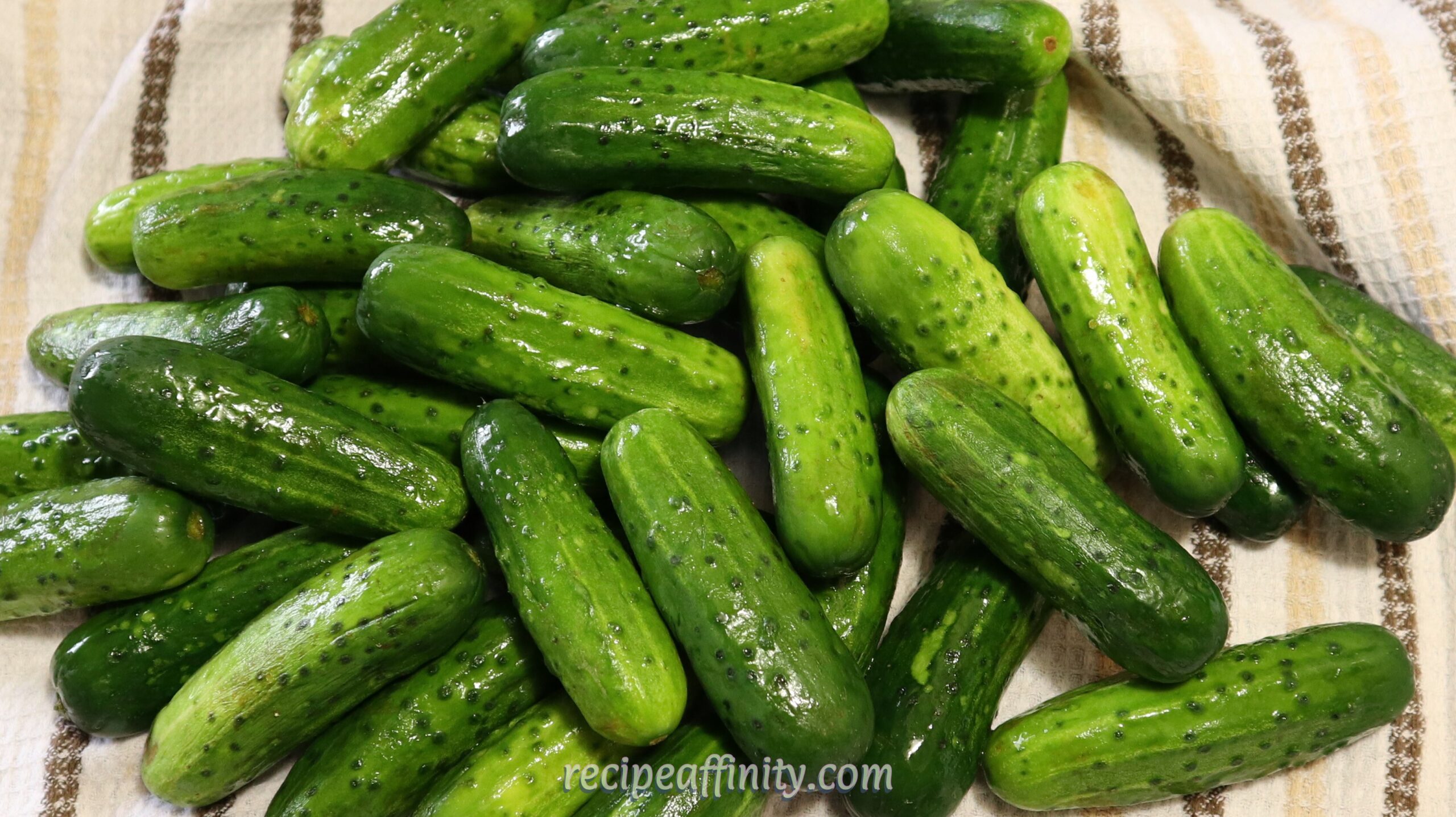 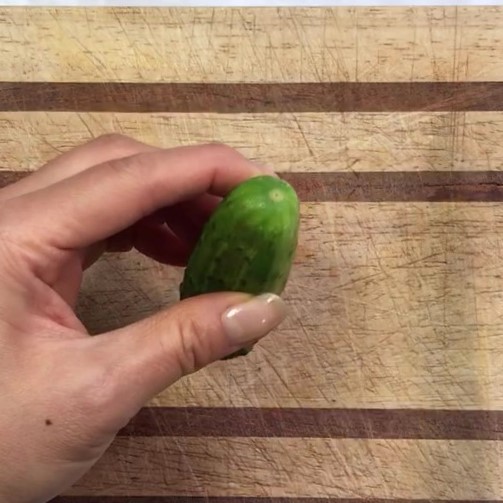 The blossom end is the lighter end, just remove a bit. 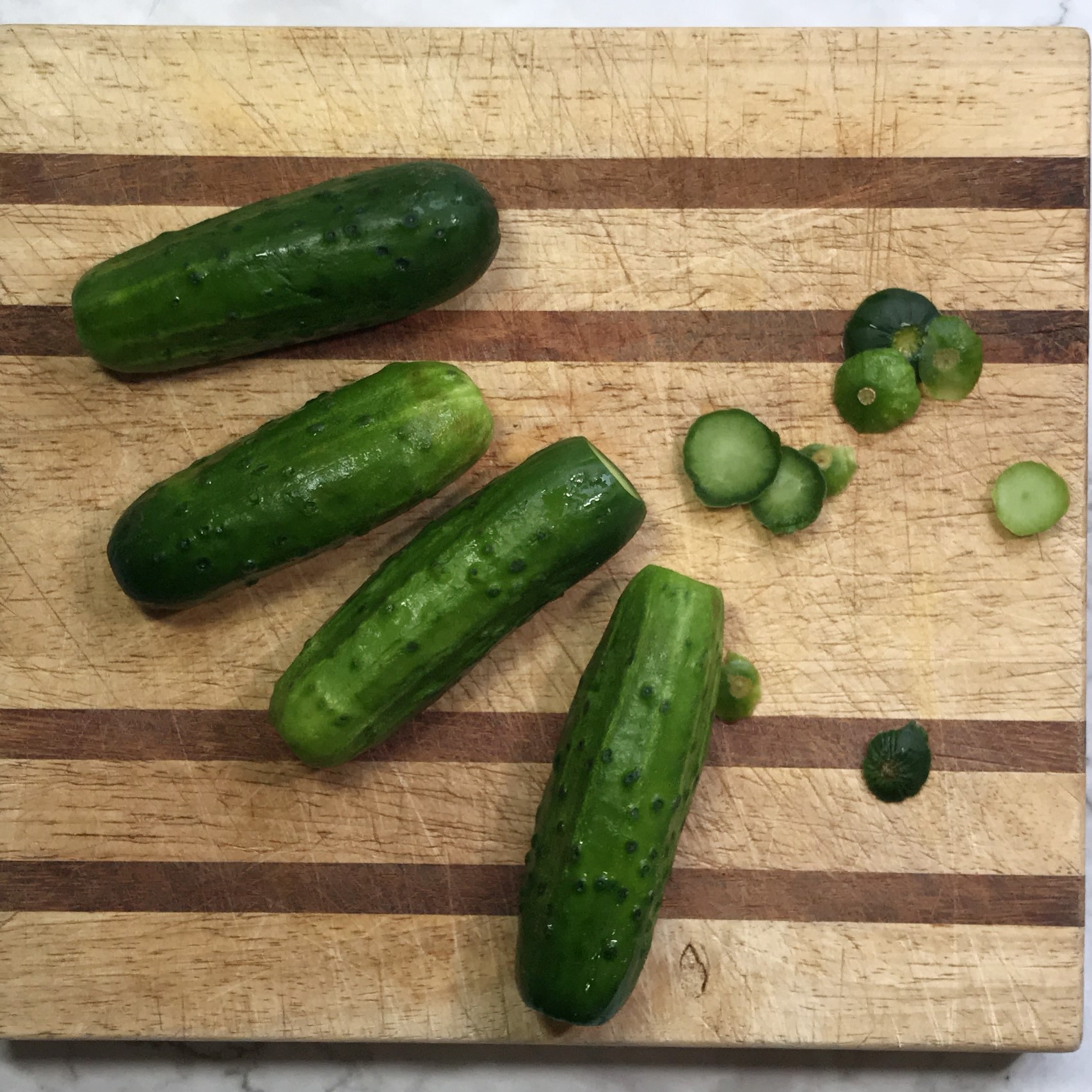 Pink Himalayan salt has minerals in it.

Why the other stuff? One is so it is “iodized salt”, added for thyroid health and one is an anticaking agent so the salt flows freely.

Pickling salt or kosher salt has one ingredient, salt.

You can use other salts, the pickling or kosher salt is recommended because you will have less sediment or cloudiness in the brine. 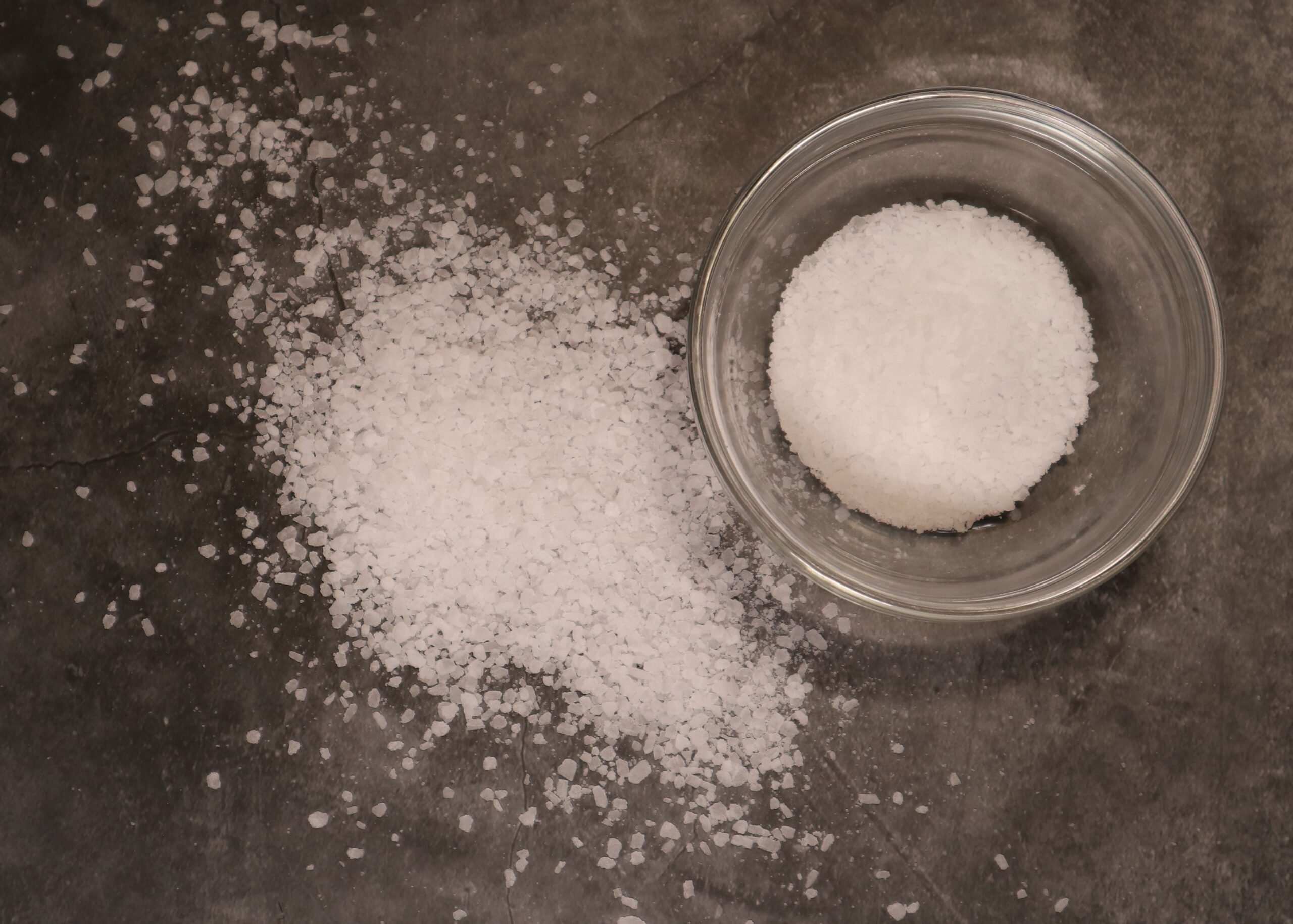 You can use just white vinegar or just cider vinegar

I wanted a less steely pickle with just white vinegar, but I wanted it cleaner tasting than with all cider vinegar.

Apple cider vinegar is apple juice that has had yeast, saccharomyces cerevisiae, added to form the bacteria that turns it into vinegar.  The same yeast used in making beer and wine, and bread.

It may make your pickles a bit sweeter, and obviously have a different flavour than if you used regular vinegar.

That said, you could add a tablespoon of sugar to the brine, but I prefer just a dill pickle. 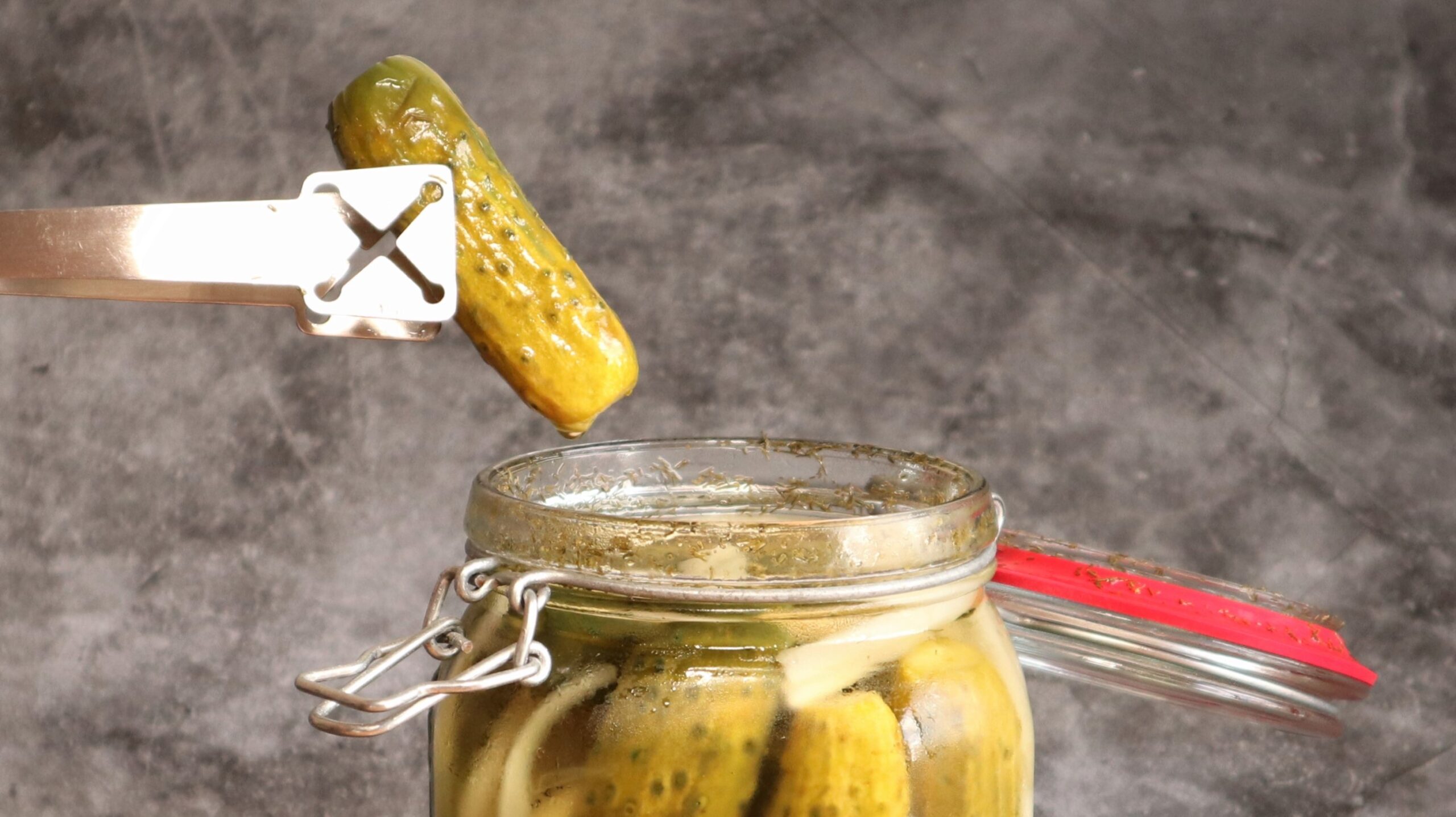 A large jar, like a regular pickle jar might take 3 garlic and a smaller one will take 2. Similar when distributing the other herbs and spices.

I like to add large slices of sweet onion, as an aromatic as well as to have it pickled.

You can make these a bit spicier, or garlicky or dilly, or less. You can omit the mustard due to allergies.

Allspice berries are wonderful.  I used ground as I did not have whole berries. Allspice is the berry-like things from a tropical evergreen tree, Pimenta dioica. They look like large peppercorns once dried, and have warm cinnamon and clove aromas.

When you smell allspice, you will be reminded of, well, pickles, a deli, lunch. 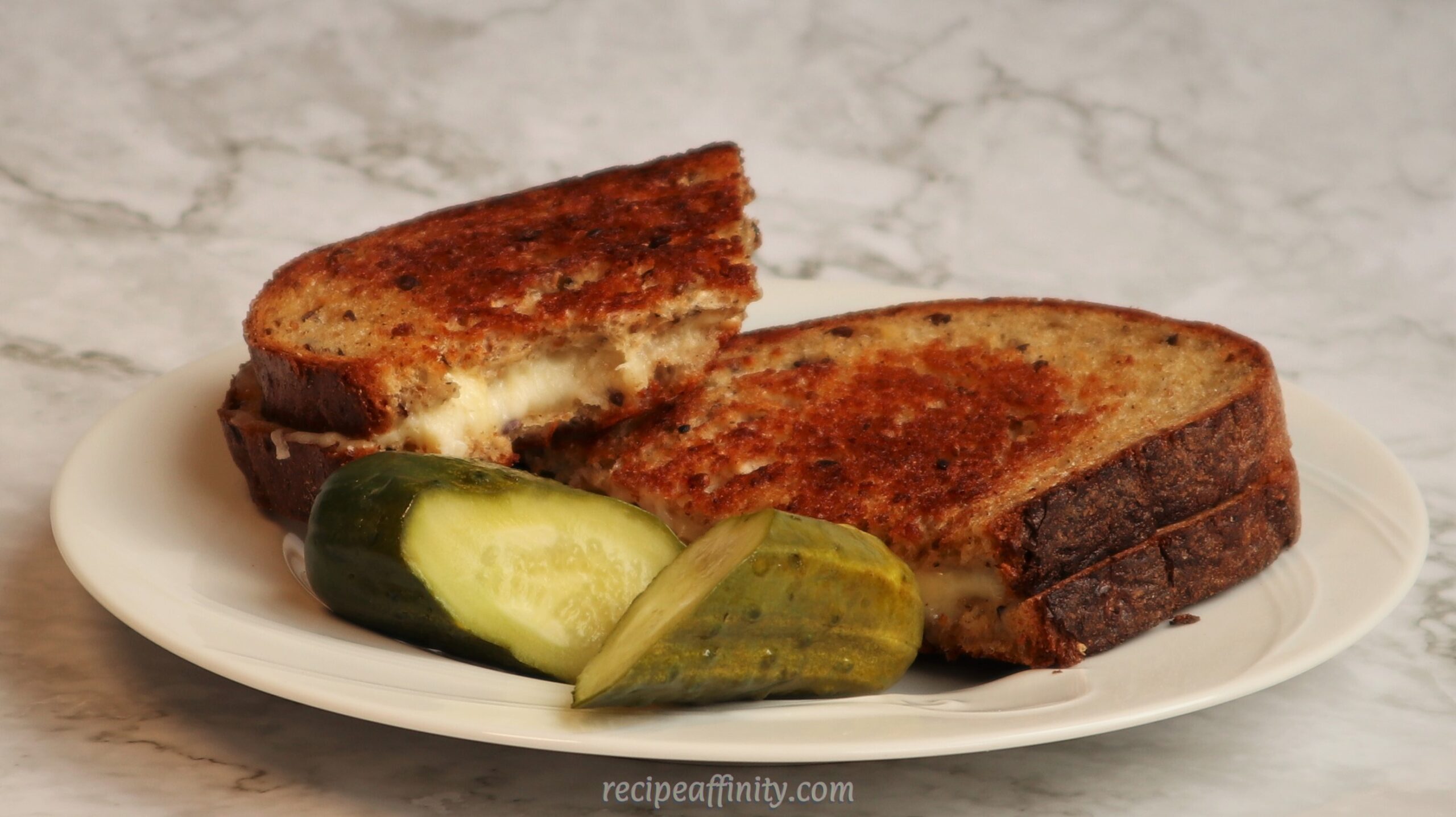 How to Make Refrigerator Pickles 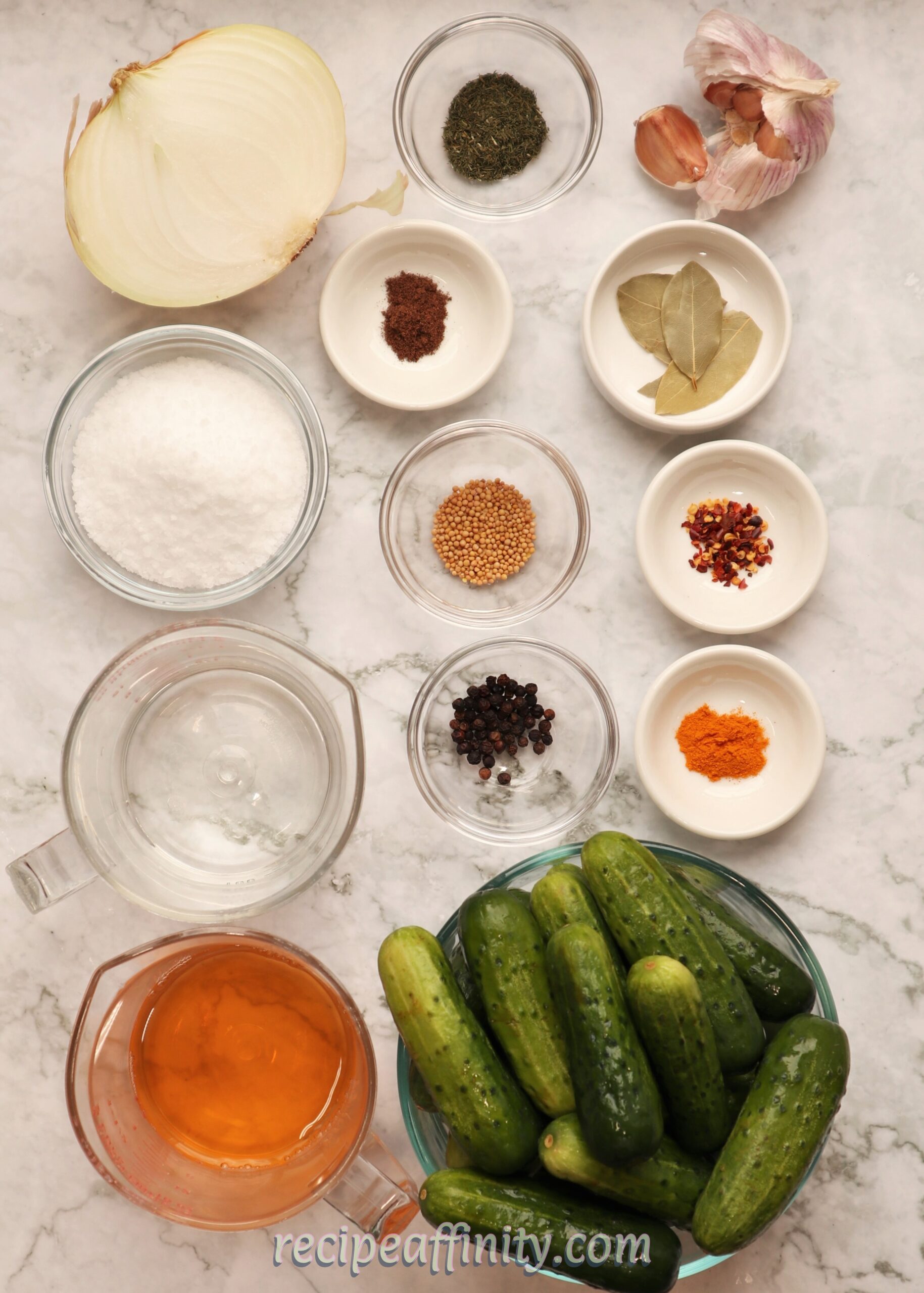 1. If using any ground or dried herbs and spices, combine the red pepper flakes, dried dill and allspice.  If you are using fresh dill and allspice berries, distribute them evenly in the jars with the bay leaves and garlic. 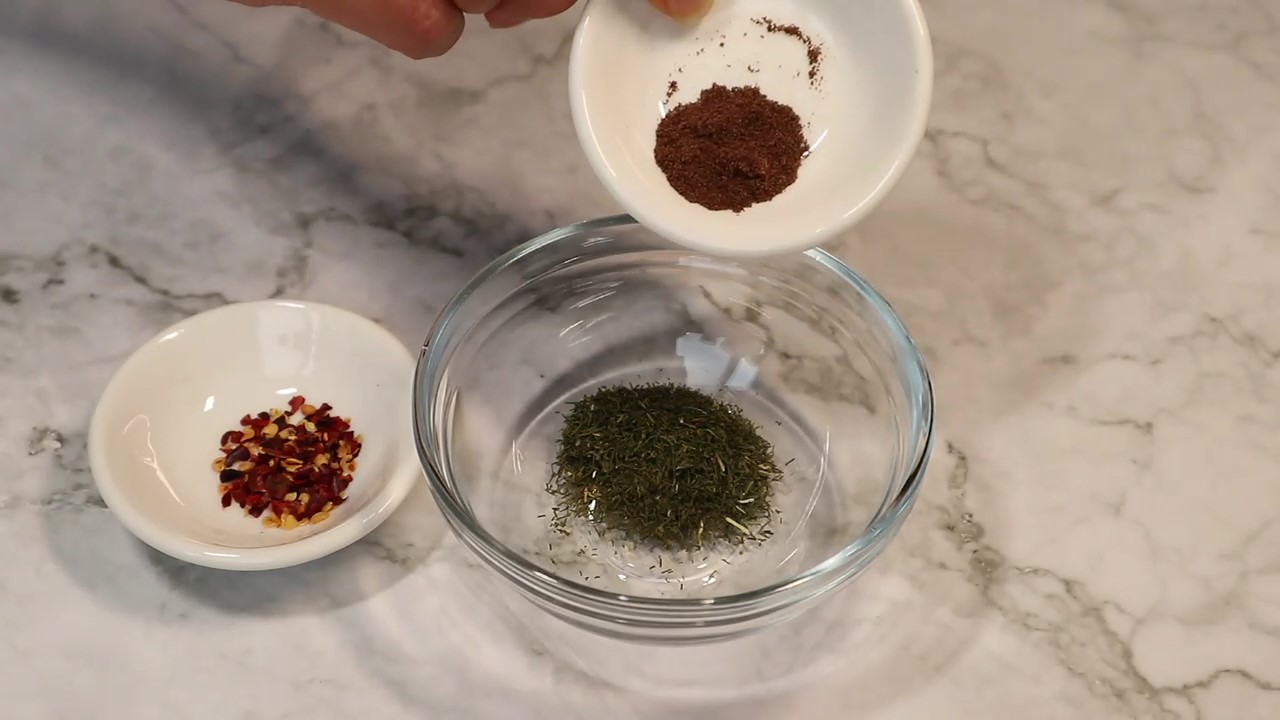 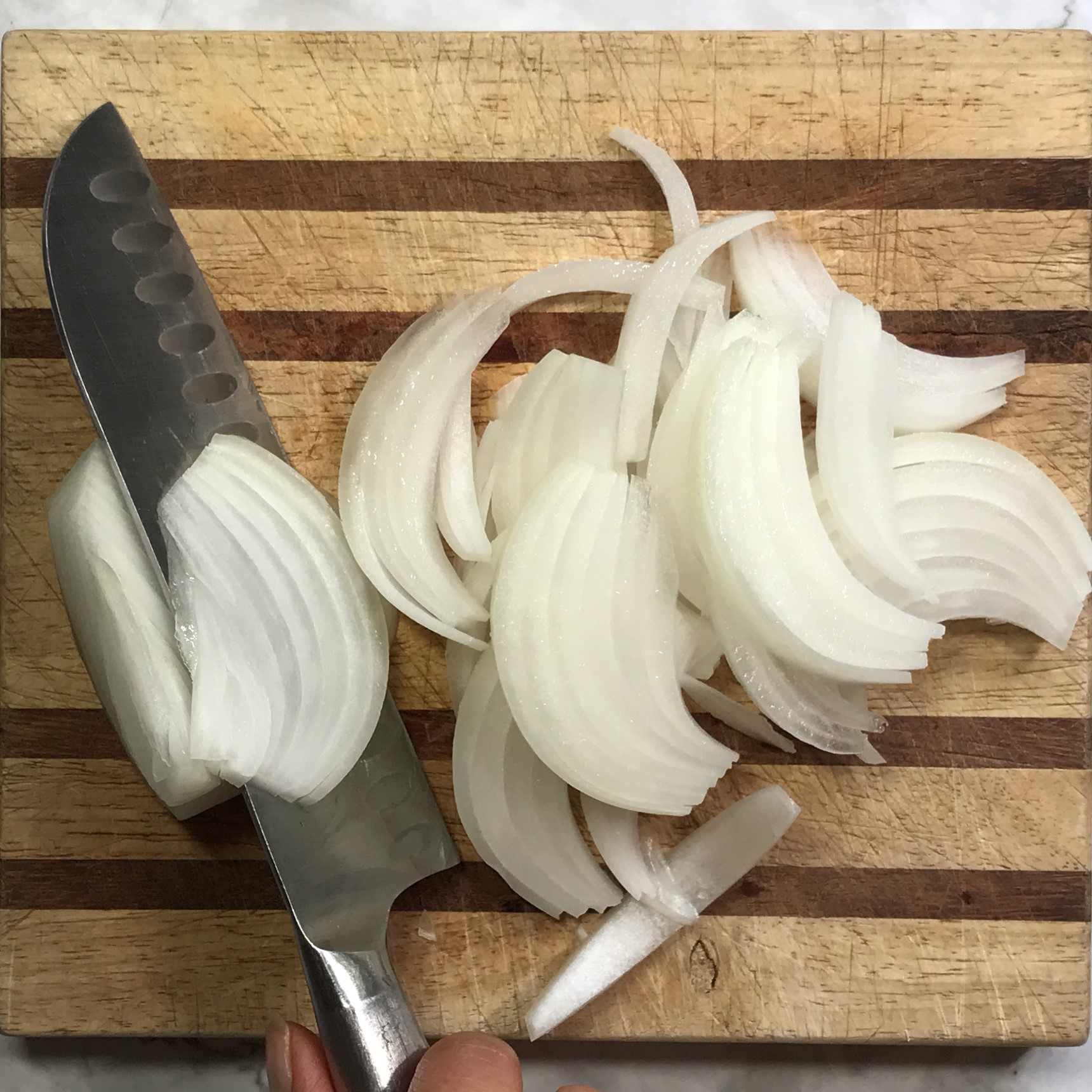 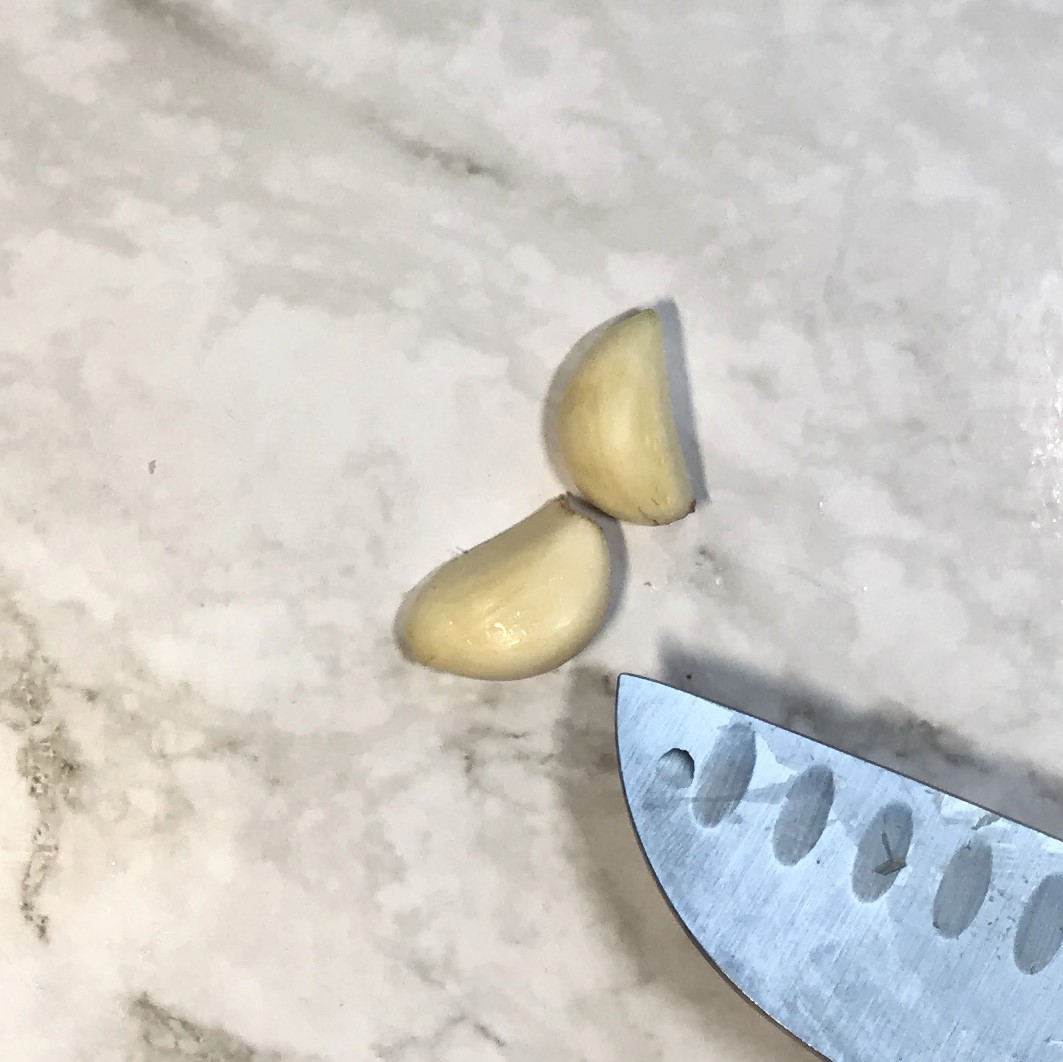 3. Add the salt, and turmeric into a large pitcher, or something pourable, preferably glass or other non reactive container, not aluminum, plastic or copper.

4. Pour in the boiling water and stir.  This is to dissolve the salt.

Heat helps the curcumin in turmeric become more bioavailable. That is, easier for the body to process and use. The peppercorns help that as well.

Over cooking turmeric lessens the curcumin benefits, heating for a short amount of time increases it. Curcumin has many health benefits. It is especially known to reduce inflammation, and muscle recovery time and protect against Alzheimer’s disease. 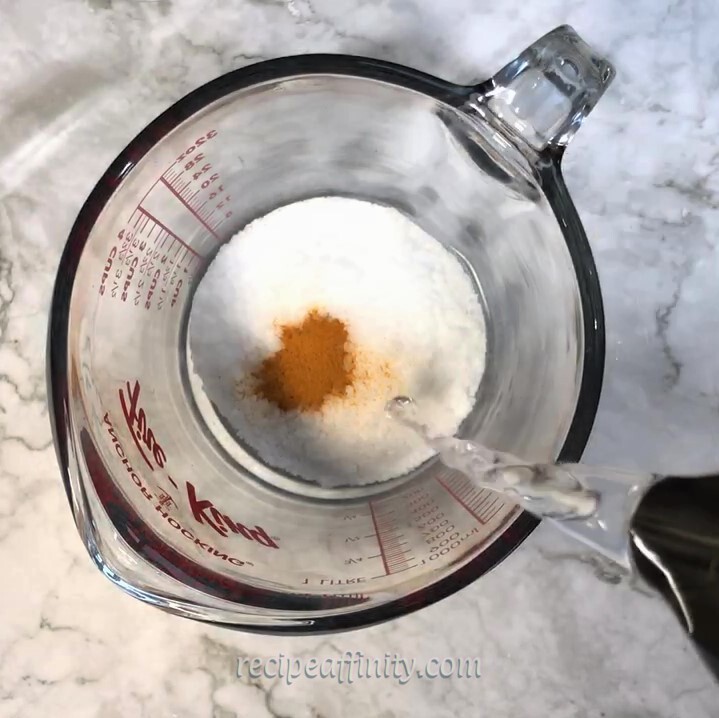 5. Add the white vinegar to cool it a bit, then the cider vinegar. 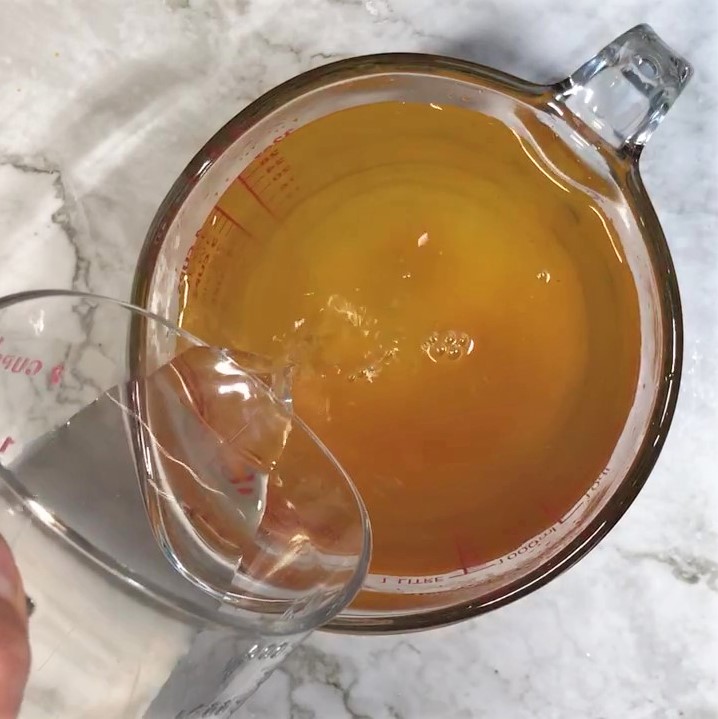 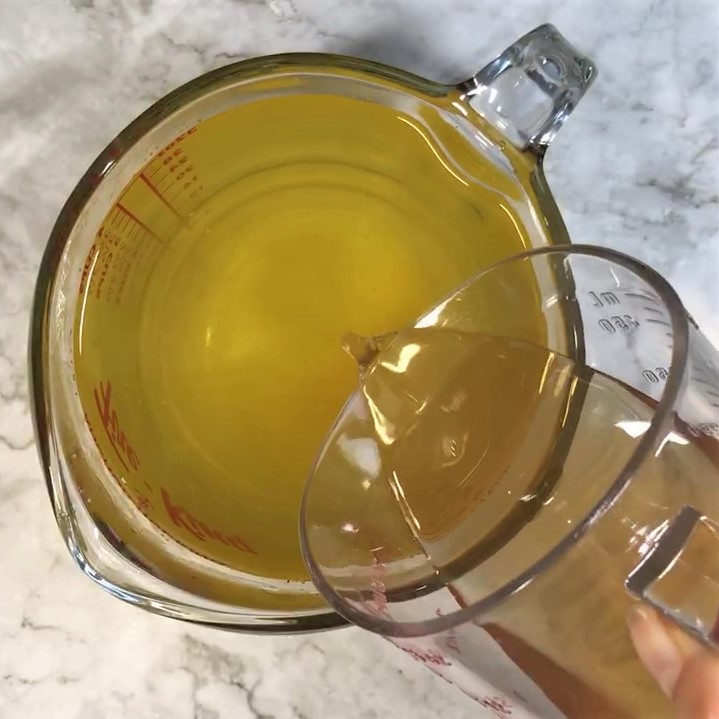 7. Put as many cucumbers in as you can.  This way they won’t bob up too much.

I do not like to cut them, I find they are less crisp and do not recomend it.  I find they keep better uncut as well. 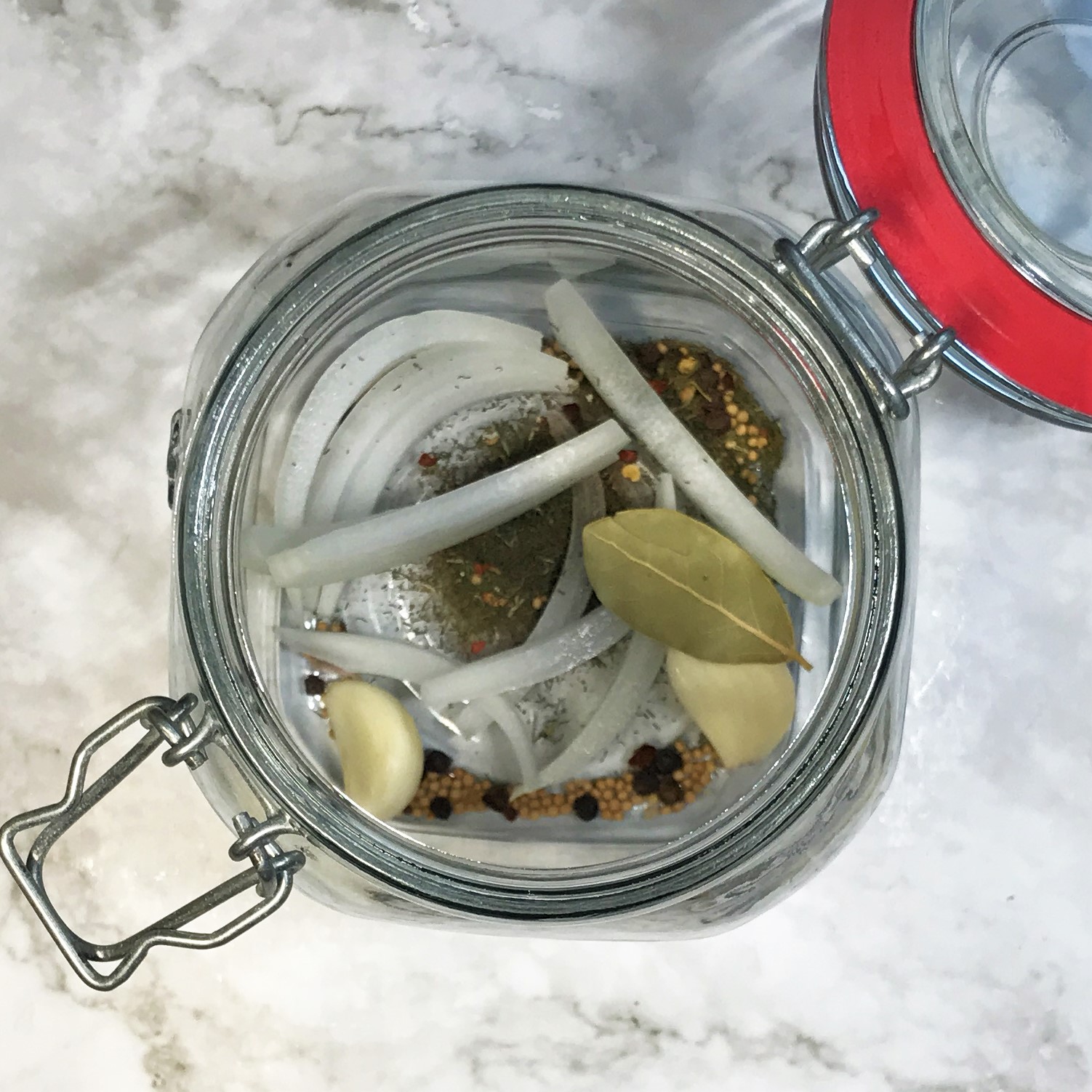 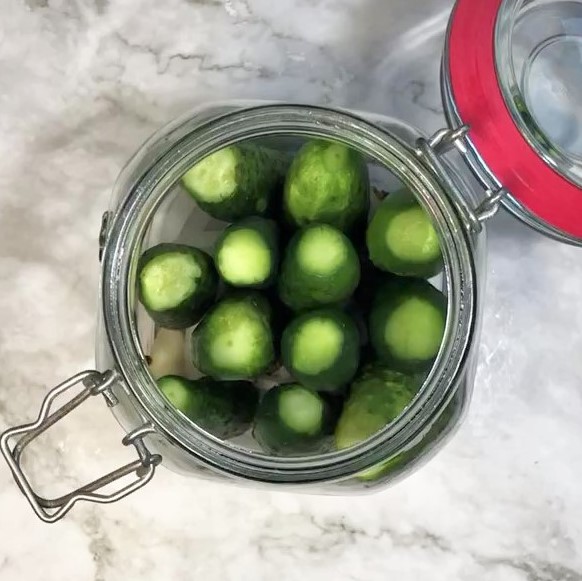 Make sure all, including the garlic, onions or bay leaves are completely submerged.

If they are not, place a (non reactive) bowl or plate that will just submerge everything without overflowing over the top because you won’t close it yet.

9. Leave it to cool, unrefrigerated overnight, or at least until it is completely cooled, then remove the submerging dish, if you used one, top up with brine if you need to, close tightly and refrigerate.

The brine can be used again, of course it will be watered down a bit.

They keep well if you make sure they stay submerged in the brine. I have had some keep for 2 weeks that were still very crisp.

They do not need special pickling jars, as I have used in the picture,  just clean glass containers that have lids. 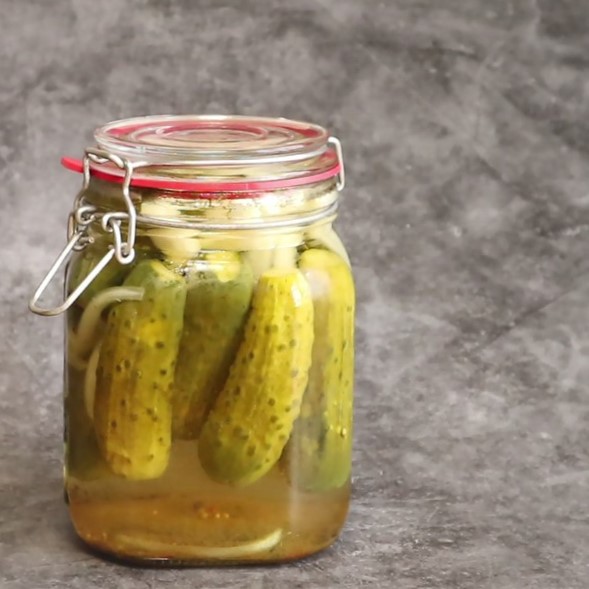 The brine can be used again, of course it will be watered down a bit.

They keep well if you make sure they stay submerged in the brine. I have had some keep for 2 weeks that were still very crisp.